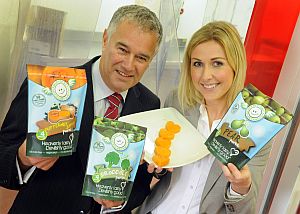 Heavenly Tasty Organics in Cookstown is being assisted by Invest Northern Ireland to develop a new range of organic baby weaning food for markets in Ireland and Great Britain.

The company, established last year by Shauna McCarney, is investing almost £60,000 in the manufacture and marketing of a range of eight fresh fruit and vegetable foods for weaning babies aged from four months.

The company has also won business from SuperValu stores in Northern Ireland.

Invest NI is providing financial assistance of over £20,000 to help the small business produce and market the portfolio of innovative products. As well as the direct financial support, the company receives guidance and advice from a dedicated client executive.

Maynard Mawhinney, Invest NI’s Food Director, who recently visited the new facility at the Food Incubation Centre on the Loughry Campus of the College of Agriculture, Food and Rural Enterprise, said: “Heavenly Tasty Organic Foods is an ambitious and driven start-up business seeking to develop opportunities from the rapidly growing demand from mothers for nutritious food for babies that’s both wholesome and tasty.

“Research shows that the share of organic food in the infant food market rose by 48 per cent last year, up from 46.5 per cent the previous year.

“According to the Soil Association, for instance, the organic baby food market was worth £2.1 billion in 2008. Significantly the market research shows that smaller companies are making the greatest inroads in this important and growing niche within food sales.

“Our support is geared, therefore, to help the company to create awareness and develop business in the UK and Republic of Ireland. Encouragingly the company has already had very positive feedback from a number of distributors, which should hopefully translate into firm orders very soon.

“The support will also assist the company in achieving necessary retail accreditation from the British Retail Consortium and SALSA,” he added.

Shauna McCarney, commenting on the business, said: “It’s been an ambition of mine to use my experience in business to set up my own small enterprise. The opportunity came with the birth of my first baby and the difficulty I experienced in finding organic and fresh food for weaning babies. Initially I began to make my own baby foods.

“The arrival of a second baby led me to carry out a bit of market research. Many of the baby foods I found were ‘on-the-shelf’ jars and dated for years, in some cases. Some contained a multitude of ingredients that I wouldn’t eat myself.

“After four years of research and hard work, in November 2010, Heavenly Tasty Organics was launched to offer mothers alternative products that are natural, nutritious and convenient. As well as developing a range of fruit and vegetable purees, I spent considerable time on creating a packaging format that mothers would find easy to use and would also eliminate waste. I opted for a resealable and attractively designed pouch holding 10 ice-cube shaped portions.

“Mothers can count on the provenance of the foods because all the ingredients are traceable and sourced from local suppliers. They are 100 per cent organic, hand selected, steamed gently and fresh frozen. The initial range of purees includes pear, apple, broccoli, butternut squash, parsnip, sweet potato, swede and carrot.”

She added: “Invest Northern Ireland’s support has been invaluable and I would encourage anyone with a small business idea to ‘Go for It’.”