A cautiously optimistic outlook for the start of 2015

Much media coverage has been focused in the past few months on budget issues at Stormont and public sector reform. Less attention has been given to the continued growth of Northern Ireland’s private sector over the past year and the prospects for 2015.

The latest Invest NI Purchasing Managers Index (PMI)* paints a positive picture overall. In the final three months of 2014 there was continued growth in output and employment, although not as strongly as in the previous two quarters. The output index was 61.2 (a figure above 60 signals a significant increase in activity), whilst the employment index was 58.3, on the back of an increasing level of new orders and expansion plans. 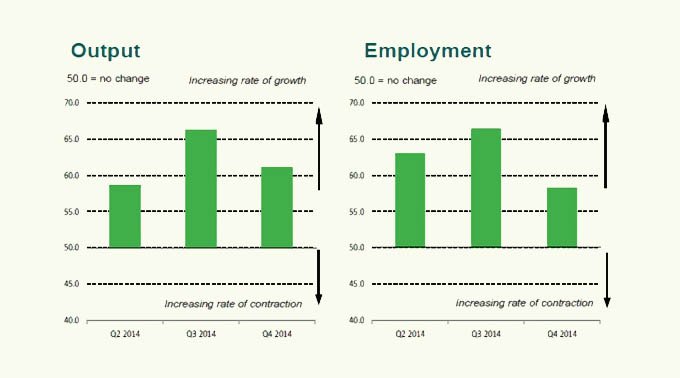 The growth in activity and employment in the Invest NI customers sampled contrasted with the marginal reductions reported by the NI private sector as a whole in the latest monthly Ulster Bank PMI survey. It remains to be seen whether the more positive results reported in the Invest NI PMI continue into 2015.

More than 4 in 5 businesses expect levels of activity to be higher in 12 months from now.

So what does the future hold? For the moment at least, those businesses with whom Invest NI work most closely remain optimistic. New orders are fuelling this optimism, with both export markets and the UK identified as sources of growth. External markets and export development are crucial to the growth of the NI economy. Competitive pressures remain evident - higher input costs (a combination of raw materials and wages) were reported by almost a quarter of respondents.

Looking at the wider economy, the dramatic fall in the oil price (and associated energy costs) which occurred at the end of the year should provide a further boost to NI businesses which is not fully reflected in these survey results. A number of other commodity prices have declined over the last 12 months too. Falling inflation means that the expected date for an interest rate rise by the Bank of England continues to be pushed further out – the headline base rate of 0.5% is now forecast to continue for the rest of 2015 at least.

In contrast, a further weakening of the Euro (linked to deflation fears in the Eurozone and the start of Quantitative Easing by the European Central Bank) is presenting further challenges for Northern Ireland businesses. The Sterling was recently at a seven high year against the Euro, although it has fallen a little in recent days. Even if the Eurozone outlook improves, the exchange rate position will encourage many firms to further diversify their target markets.

So overall, a cautiously optimistic outlook but with a number of factors likely to weigh down on growth prospects for many businesses. The next PMI survey will provide further insight into how both costs and exchange rates are influencing sentiment and activity for the remainder of 2015.

*A quarterly survey of 150 account managed firms who work with Invest NI undertaken by Markit Economics Ltd. Of these, 62% were manufacturers and 30% were service providers.