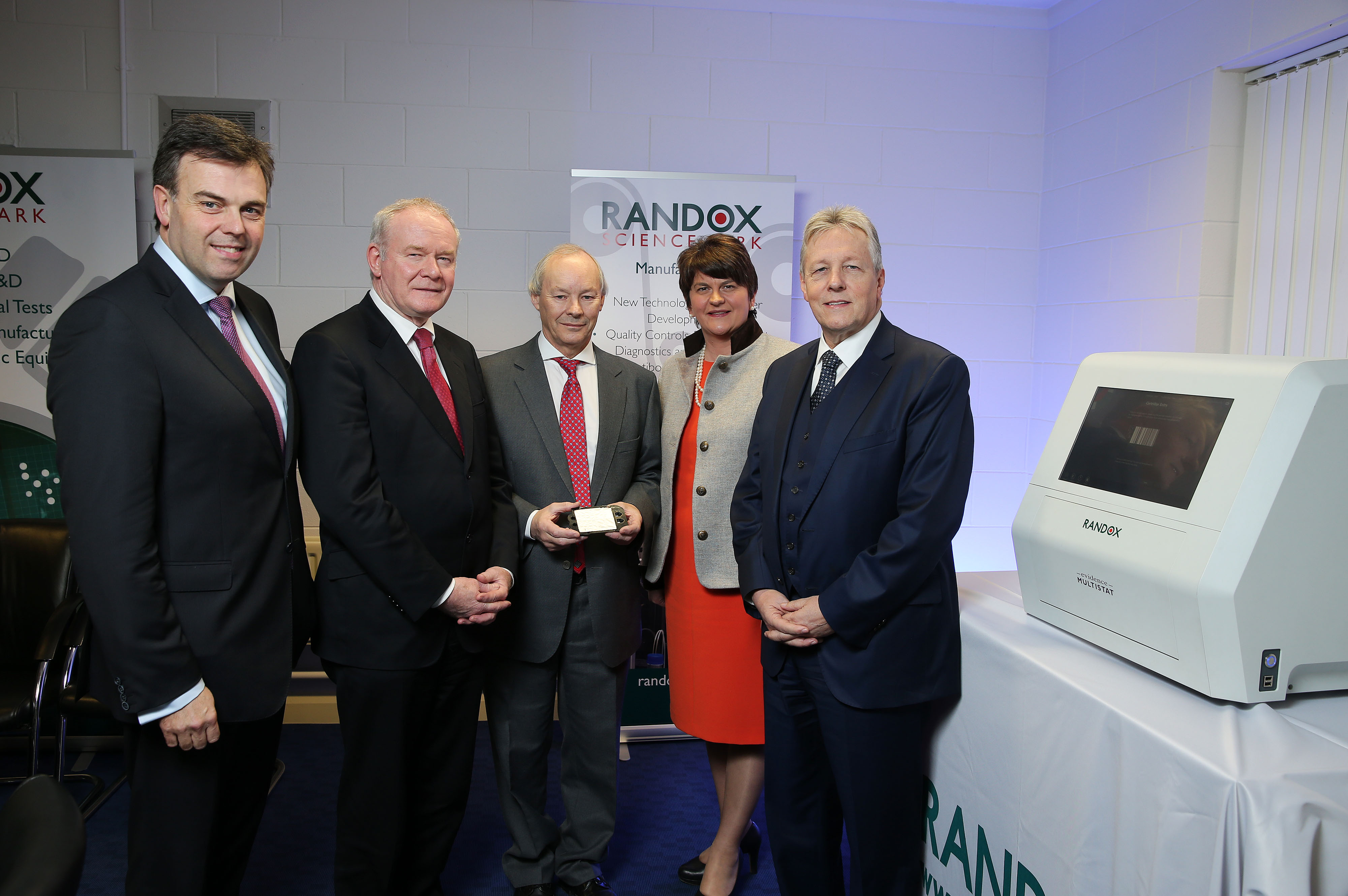 “Today’s announcement will underpin the company’s aim of increasing revenues by 60% to almost £150million by 2018 through more efficient manufacturing and by speeding up the development of new products.

“Randox currently employs almost 800 people in its sites in Northern Ireland and, as a result of today’s announcement, that figure will rise to 1,300 employees by 2018. This is very welcome news.

“The Northern Ireland Executive’s Innovation Strategy sets out a vision for Northern Ireland to become one of the UK’s leading high growth regions by 2025. Innovation is the key driver for economic growth and once again Randox has proved that it is leading by example.”

The deputy First Minister Martin McGuinness said: “This is a phenomenal announcement by Randox one of our major exporters. The new jobs will generate over £16.2 million a year in salaries to the local economy with an average salary of £30,000. The new jobs will include production, administration, research, sales and marketing posts.

“Randox’s ability to diversify into new markets with new products demonstrates innovation is central to everything they do. Their continued success will not just create jobs and boost the economy but potentially save lives.

“Randox is a company founded locally but with an established global presence. This investment signals their continued commitment to the north of Ireland and will have a positive impact on Randox’s extensive local supply chain. I commend founder Dr. Peter Fitzgerald and his team as they continue to be at the forefront of the diagnostics industry.”

Enterprise Minister Arlene Foster said: “Randox is one of our most successful indigenous companies and a cornerstone of our important and growing life sciences sector. This investment in new premises and new staff will ensure that it is able to take advantage of market opportunities in the healthcare diagnostic market, which is set to grow rapidly over the coming years.”

Invest Northern Ireland is supporting the investment with an offer of over £4.7million.

The new facilities, at the site of the former Massereene army barracks in Antrim, have the potential to expand further.

Managing Director of Randox Dr Peter FitzGerald said: “Randox’s share of the global market is steadily rising, with around 5% of the world’s population diagnosed using Randox products. To continue our expansion we must invest in our manufacturing, engineering and research and development facilities.

“Our new facility, which will be called the Randox Science Park, will be a futuristic manufacturing plant, with increased capacity and efficiencies, as well as housing pioneering R&D labs. We are also seeking to recruit high calibre staff across a range of disciplines to help us develop, produce and sell Randox’s revolutionary diagnostic solutions, ensuring that individuals worldwide, have access to timely and correct diagnosis. ”

Over the last three years Invest NI has also supported a number of R&D projects carried out by Randox.