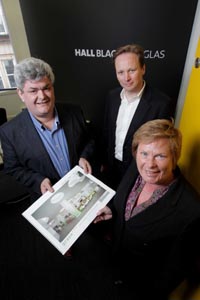 Hall Black Douglas Architects, based in Belfast, has won its first business in India from participation in Invest Northern Ireland trade missions.

By developing an introduction via Invest NI, Hall Black Douglas secured an opportunity to bid for a substantial redesign of part of Oberoi Mall, in the 80 acre Oberoi Garden City development for the highly respected Mumbai developer Oberoi Realty. Competing against other international architects the practice won the project with its striking concept design and fresh approach for the 800 capacity food court redevelopment in one of Mumbai's most prestigious malls, which often plays host to the Bollywood premieres in its multiplex cinema.

Directors Stephen Douglas and Alistair Beckett, who have jointly been responsible for the venture into the Indian market over the last year, announced their first project for a major client during a meeting with Dr Vicky Kell, Invest NI Trade Director.

Dr Kell, welcoming the news, said: “This is a most significant and encouraging development for this ambitious company and the wider expert services industry in Northern Ireland. It positions the company to benefit from the huge investment currently underway across India in a very broad range of property development and infrastructural investments.

“The contract demonstrates that Northern Ireland design and architectural practices can succeed in this highly competitive marketplace by investing time and other resources to build a presence there.

“Hall Black Douglas has worked tirelessly to gain a foothold in the market, a commitment which has included taking part in our trade missions and working closely with our staff in Belfast and Mumbai.”

Hall Black Douglas Director Alistair Beckett, said: "We aimed to exceed the client’s expectations and provided an entire branding concept as well as interior design, lighting, furniture and material palettes, all of which were based on the concept of a wooded glade. Mr Vikas Oberoi, the Managing Director, was impressed by the fresh design approach which radically changed the feel and atmosphere of the venue.

“The 800 seat food court will have 25 international and local food outlets with completion scheduled for early October 2011." The Oberoi Mall forms part of the larger Oberoi Garden City complex which is currently under construction.

Mr Douglas added: “This project with a major Mumbai-based developer, Oberoi Realty, gives us an important foothold in the market on which to build further business in India. This is a huge market which could become immensely important to us. Working together with Studio 55, we hope to develop a strong base in key sectors such as healthcare, education, residential and hospitality.”