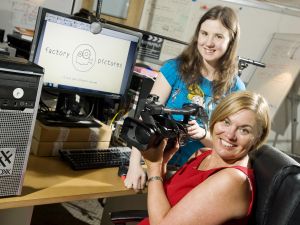 The company is aiming to become Northern Ireland’s leading provider of visual effects (VFX) and digital animation and has secured valuable business with US and UK production houses since it was established in 2010.

The global market for VFX is steadily growing and is predicted to be worth $100 billion by the end of this year. Factory Pictures is investing over £250,000 in a range of business development activities to capitalise on this potential.

Invest NI has offered over £80,000 of support towards the investment, partly funded under its Jobs Fund and by the European Regional Development Fund.

Tracy Meharg, Invest NI’s Executive Director of Business Solutions, said: “Factory Pictures is an ambitious company operating within a growing niche of the film and television industries. Its expansion plans will help to position Northern Ireland as a viable destination for VFX and animation development and complement the current successes of our screen industries.

“The company’s 3D animation and VFX training programme will bring advanced skills to Northern Ireland and strengthen the Creative Industries sector here. It will also support the local film industry by providing additional post production services which are currently sourced outside Northern Ireland.”

As part of its expansion, the company will recruit eight graduates and train them in highly specialised 3D animation and visual effects techniques to boost its competitiveness in this area. Factory Pictures has also used an Invest NI Innovation Voucher to research post production techniques and formats with industry experts at the University of Ulster.

Victoria Farley, Creative Director of Factory Pictures, said: “The market for VFX is growing year on year as film and television companies use more computer-generated imagery and seek to trim costs by outsourcing work. Currently companies which are filming in Northern Ireland send their visual effects work to London, Dublin and to the USA for completion.

“Invest NI’s support has been pivotal in accelerating our plans so that we can take full advantage of this opportunity. Over the coming months we will be focused on developing our capabilities within the sector and on positioning Factory Pictures among potential UK and US customers as the leading visual effects provider in Northern Ireland.”