Bubble in export deal with Fonterra in Saudi Arabia 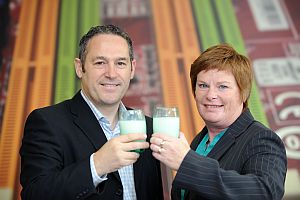 The Northern Ireland company is supplying Speechbubble®, its innovative multi-lingual technology for health and safety training, to the Fonterra plant at Damman, which produces jar cheese and milk powder for the markets throughout the Gulf region as well as North Africa and East Africa.

Dr Kell said: “Bubble saw the potential of Saudi Arabia on our trade missions in 2010 and took a decision to concentrate resources on developing business particularly with major manufacturers requiring a training solution for large and diverse workforces. The success it is now experiencing demonstrates that smaller technology companies can do really good business there with even the biggest international corporations.

“The business from Fonterra and the inquiries Bubble NI is currently handling from other manufacturers in Saudi shows that it has developed a unique product that the market needs. It’s extremely encouraging to see technology businesses grasping the huge opportunities developing rapidly in Saudi Arabia.

Mr Hill said: “The contract from Fonterra, one of the world’s biggest companies, is a tremendous boost for us and will help our focus on developing sales in Saudi Arabia, a market which, over the past 18 months, has grown to provide 50 per cent of our business. Our growth there is the direct result of a strategic decision to invest considerable time and resources in this huge marketplace.

“Fonterra required an effective solution to the problem of training a workforce that includes many nationalities in essential health and safety procedures. Our technology was developed to meet just such a requirement. As well as Arabic, the system for Fonterra, which uses graphics very effectively, now covers Urdu, Hindi, Tamil and even Tagalog, a Philippino language.

“Our business there has benefited immensely from participation in Invest NI trade missions. Indeed the contract with Fonterra resulted from a referral by another Northern Ireland company on a mission in which we also participated. Following the meeting with the company, Fonterra subsequently phoned me for more information. This is an excellent example, one which benefited us, of the collaboration and camaraderie which features on trade missions.

“Our focus on Saudi and the experience we’ve developed of this important market has also enabled us to identify a good distributor, Energy Industries training Centre based in Dammam, Eastern Province, to represent us there. The CEO of the company, Mr Saad Ansari has become a strong ally and a great ambassador for our business. We’ve also learned that it’s a market which requires regular visits. I’ve been there eight times over the past 18 months, and this commitment is now producing exciting business leads.”

Formed in 2008, Bubble NI currently employs seven people in Belfast in the development of software. As well as Saudi Arabia, Bubble now has distributors in Europe, the US, China and Australia.