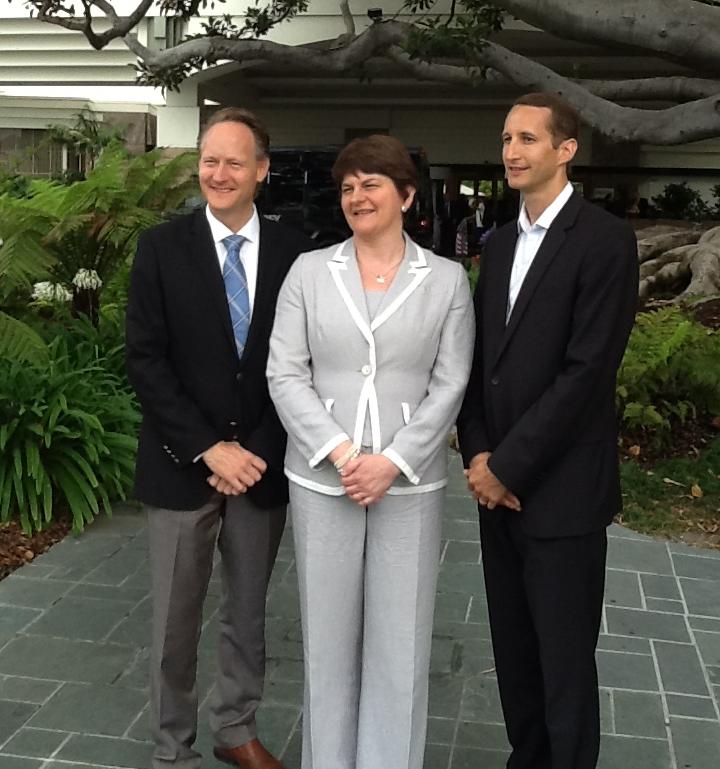 The day started early with a breakfast hosted by the Minister of Enterprise Trade and Investment. Guests included a number of potential investors and members of our Diaspora network in Los Angeles. It was a good opportunity to bring people up to date with the great things happening in Northern Ireland, such as our recent investments, in a relaxed environment. Invest NI’s Chief Executive Alastair Hamilton also spoke about the range of R&D support programmes we have available in NI, such as patent box, tax credits and Grant for R&D, which makes NI the most attractive region in the UK for R&D investment, which a number of the guests were very impressed by.

Following the breakfast we headed across LA to a meeting at HBO where the Minister and Alastair met with Jay Roewe and Janet Graham-Borba Senior VP's of Production at HBO.

It is always important to take the time to meet existing investors as well as potential new ones, giving an opportunity to find out how things are going and talk about potential future opportunities.  Filming of Season 5 of Game of Thrones gets underway next month so it was a good opportunity to hear how well the local crews are supporting HBO.

The final meeting of the day was with XBox Entertainment Systems to talk about their recent experience in Northern Ireland producing a TV adaptation of their successful game Halo.  And then it was off to the airport to catch a flight, in a very small plane, to San Diego for day 2.

Watch the video of Alastair addressing the Bio breakfast.

Attendees also listened to Karen Borda, Global Head of Business Systems Adoption based at Almac's office in Philadelphia. She spoke about how the company has grown from its base in Craigavon into the global company it is today. She was very complimentary about how important the support of Invest NI had been to Almac's growth, through both jobs and R&D support. She finished by telling the potential investors in the room 'you would not be wasting time reaching out to Invest NI to partner with you to grow your business'.

David Waugh of Queen's also addressed the guests, speaking about the great collaboration in Northern Ireland between business, academia and government. In particular he talked about how the partnering between QUB and Almac was resulting in success in clinical diagnostics. Investors were left in no doubt that Northern Ireland has a lot of offer and the Minister and Alastair followed the breakfast with a series of meetings with life sciences companies considering investing in Northern Ireland. We hope to have good news as a result of these meetings in the future.

The BIO Convention taking place in San Diego this week is the world's leading Life Sciences exhibition, with more than 1700 exhibitors including 60 state/regional/country pavilions. Invest NI had a stand there promoting Northern Ireland as a either a location to invest, or to partner with. As part of the stand we hosted NI based life sciences companies and universities who come to meet with high level executives and decision makers. You can listen to Le Roy Dowey from University of Ulster speak about why the university attends BIO and what they hope to achieve as a result here.

There will be more news from BIO tomorrow...

Leading the Northern Ireland trade mission to BIO Convention was a key part of the Minister's overseas programme this week. I caught up with her at the Invest NI stand to hear what she thought of the exhibition and why participating at events like this is important for companies wanting to build export business. Watch the video of Minister Foster speaking about BIO 2014. 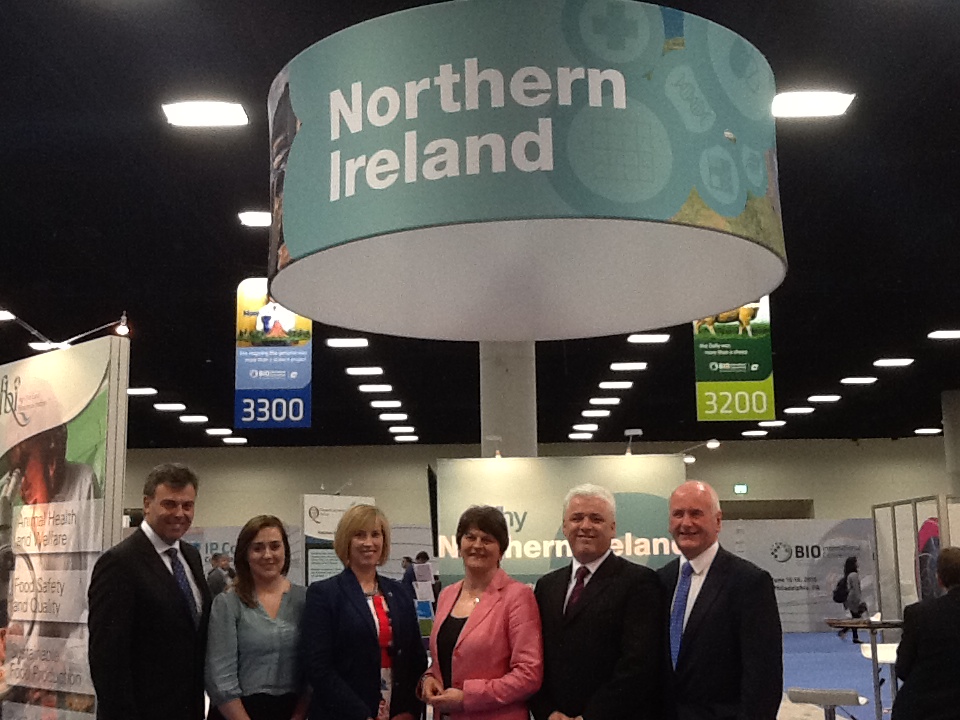 Minister Foster, Alastair Hamilton and members of the ETI Committee at the Invest NI stand, BIO 2014.

The Minister was joined at BIO by members of the Enterprise, Trade and Investment Committee who are accompanying her on the San Diego and San Francisco elements of her visit programme as an opportunity to see firsthand what is involved in overseas trade missions. Gordon Dunne, DUP; Megan Fearon, Sinn Fein; Fearghal McKinney, SDLP; and Sandra Overend, UUP are representing the Committee on the trip. Seeing the size and scale of the exhibition and the number of other countries there made the Committee appreciate just how well Northern Ireland is doing in the life sciences sector. 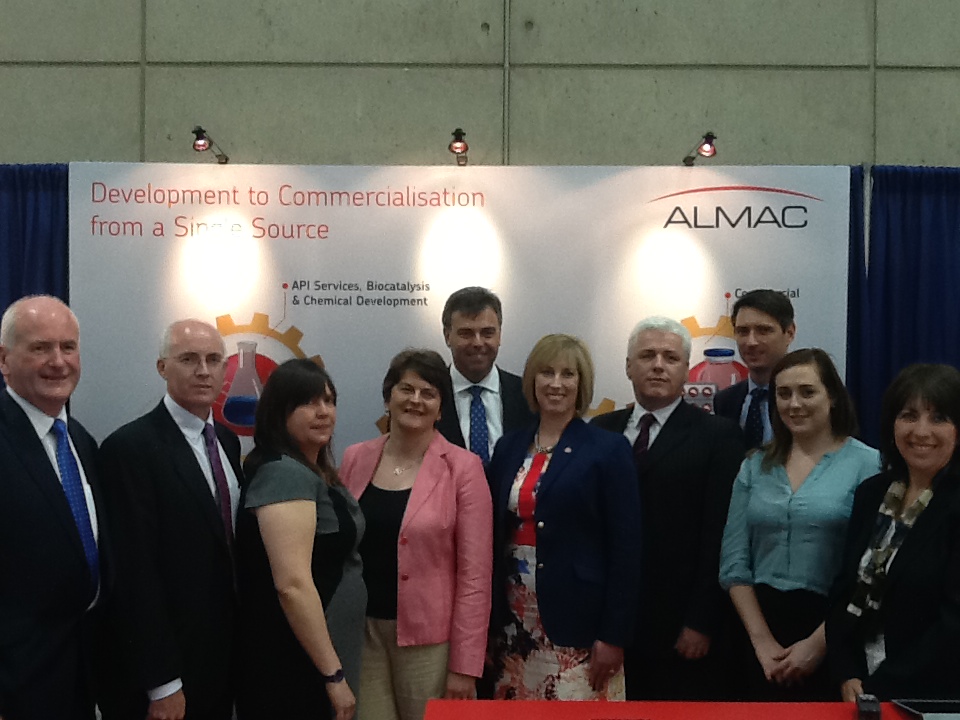 Minister Foster, Alastair Hamilton, members of the Enterprise Trade and Investment Committee with Karen Borda at the Almac stand, Bio 2014.

As well as visiting the Northern Ireland stand and taking time to meet with the companies that were there, the Minister and Committee also visited the UKTI stand, the San Diego stand and also met with Almac on the company's own stand, meeting up again with Karen Borda who had spoken at the InvestNI BIO breakfast.

The Minister also had the pleasure of meeting with Leardon Solutions in San Diego and announcing their new investment into Northern Ireland - the company's first European base - creating 10 new jobs in its product development and design centre. The company is very excited about its move into Europe and was attracted to Northern Ireland because of the pool of talented people with design, technical and engineering skills, the ability to work closely with our universities, and the support Invest NI was able to offer.

Next stop for the visit programme is San Francisco...

Diary of a Trade Mission - Day 3 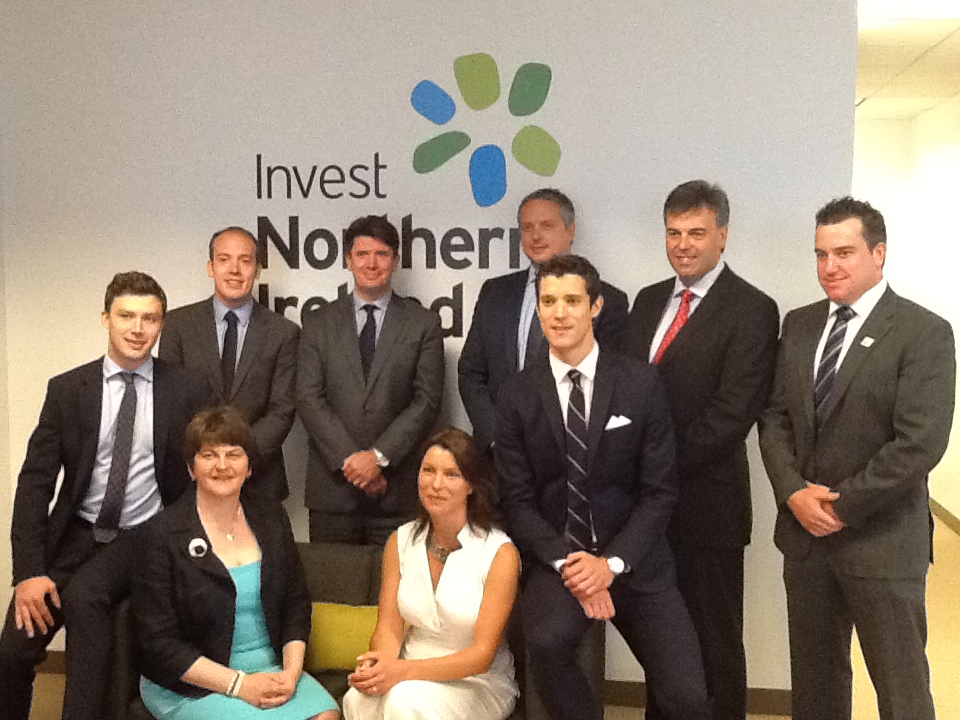 The morning got off to a foggy start with an early morning visit to Invest NI's new San Francisco office where the Minister met the team and thanked them for all their hard work and congratulated them on the results this was delivering for Northern Ireland.

Following this visit we took the one hour drive into the valley for two separate meetings with potential new investors. Having the Minister lead these meetings shows the companies just how seriously we take their interest in Northern Ireland. It also gives the Minister the opportunity to hear what potential investors are looking for from Northern Ireland as a location. 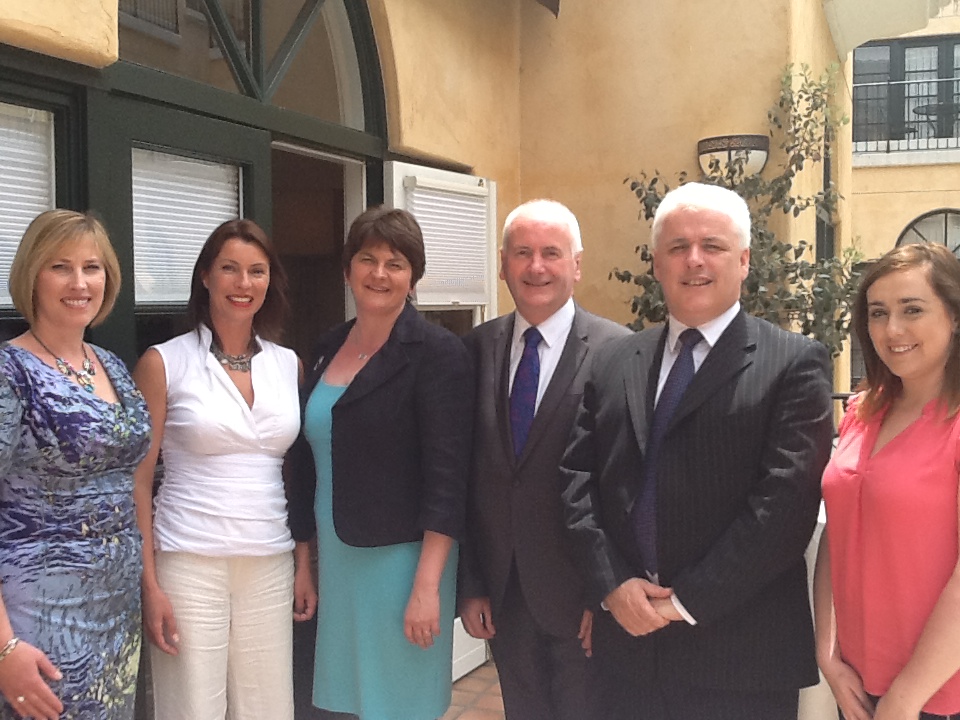 Minister Foster with the ETI committee in Palo Alto.

We then headed to Palo Alto where the Minister hosted a lunch for potential investors. She was joined by the ETI Committee, who had spent the morning meeting with businesses in the area. There were over two dozen companies at the lunch and I spoke to Alastair afterwards to find out how it went.

It was then time to head to the airport to catch a flight to the fourth city in four days, Chicago, and the last leg of this busy visit programme.

Diary of a Trade Mission - Day 4 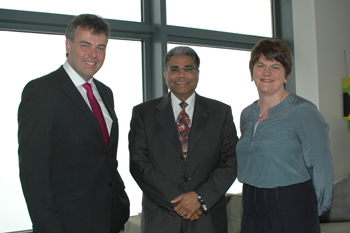 The Minister's day in Chicago started with a event hosted by the British American Business Council where she met with potential investors, plus some familiar faces such as Suren Gupta from Allstate and Kevin Flynn from Olenick & Associates. The Minister addressed attendees, speaking about all the great things that are happening in Northern Ireland, in both the business and tourism areas. She told the assembled guests about the investment opportunities that exist and how Invest NI can help businesses to access key skills and new markets.

Following this breakfast event the Minister and Alastair met with a potential new investor. It was a very positive meeting which we hope to have news on in the near future. The group then visited one of our existing investors CME, the last engagement of the visit programme where the Minister was updated on how the company's plans in Belfast are going. The company then gave a tour of the trading floors and it was great to see firsthand the technology that is being developed in Belfast being used on the floor of the exchange.

While the Minister was in Chicago, the ETI Committee remained in San Francisco and started their day with a meeting with the Bay Area Council, a coalition of the area's largest employers. The Bay Area has a very diverse economy, not all tech, though it certainly leads the way in this sector. It is also known for its private Venture Capital. Matt Regan, VP Government Relations for the Council explained that the Bay Area is not an easy place to do business due to the high costs. This is where Invest NI can, and does, step in. We are in a global economy so we can encourage businesses that can't place employees in the Bay Area to consider Northern Ireland as a location with much lower operating costs and a strong, skilled employee pool. The trend of late shows that Silicon Valley companies, and in particular start-ups, migrating north to San Francisco which is why Invest NI relocated its office from San Jose to the city. In Matt's view Invest NI punches above it's weight in what it is doing in San Francisco, building vital relationships with businesses that could, and in a number of cases have, become investors.

These relationships are crucial to our success and take years to build and are as important as the 'sales message' we have about what Northern Ireland has to offer.

The Committee then met with the Mayor of the City Of Berkeley, a small California City but known around the world for its innovation. During this meeting the Mayor and his team explained the importance of their technology incubator.

Speaking after one of the meetings, Gordon Dunne, from the ETI Committee said: 'I have been most impressed by what we have seen. Invest NI is doing a great job. Coming out here and seeing firsthand what is involved has been invaluable.' Alastair spoke to me about why it was important for the Committee to join this visit programme.