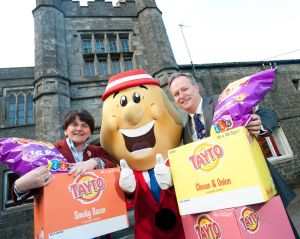 The crisp and snack company is committing nearly £6million in additional wages and salaries over the next five years, which will be a welcome boost to the local economy at its plant in Tandragee, Co Armagh.

Invest Northern Ireland has offered the crisp and snack company £232,000 of support through the Jobs Fund to assist with its expansion. When in place the new jobs will contribute some £1,160,000 a year in salaries to the local economy.

Announcing the new jobs, Arlene Foster said: “For over 50 years Tayto has been providing employment in Northern Ireland and in the past six years the company has experienced significant growth through acquisition. This investment in new jobs reflects the company’s ongoing commitment to the local area.

“Invest NI is supporting the investment through its Jobs Fund, which is helping companies create jobs and get people back into work. By 2014 Invest NI aims to have supported the creation of 4,000 jobs through this measure, which is part of its Boosting Business initiative.”

Tayto is the third largest crisp and snack manufacturer in the UK. It currently employs 390 staff at Tandragee Castle, and a further 900 at its other UK sites.

Paul Allen, Tayto’s Chief Executive, said: “These new positions have been created as part of our long-term strategy to increase the capacity of our facilities here in Northern Ireland to meet increased demand, both nationally and internationally. While we are now very much a national company, our home is very definitely in County Armagh.”