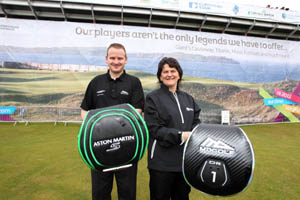 The Minister extended her congratulations to David Millsopp during her visit to the Irish Open held at Royal Portush. Together with Michael Morton, David established the business in 1996.

Arlene Foster said: “This deal is an exciting new venture for MD Golf which has established itself as a serious player in the international market.

“Invest Northern Ireland’s support has already helped it secure lucrative deals and distribution arrangements and this latest agreement will provide a prestigious platform to expand its global sales.”

David Millsopp said: “We are delighted to be appointed as the global licensee for Aston Martin Golf and hope the agreement will further enhance the profile of the business and in turn generate new sales. Our company supports many local players both domestically and internationally and we are hopeful that we can cultivate some great young talent into world class players. The Irish Open at Royal Portrush was a valuable opportunity to promote our brand and access potential new customers.”

MD Golf products are sold to 37 countries including Indonesia and the Philippines. Its largest markets outside Great Britain are Japan and Australia.