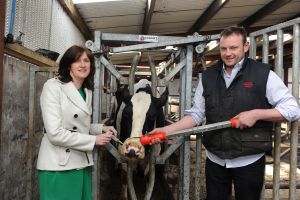 DBR Trading Ltd in Fivemiletown has been assisted by Invest Northern Ireland to perfect an innovative device that makes administering drugs to cows easier and safer for vets and farmers.

The company used an Invest NI Innovation Voucher to seek design support from experts at the InnoTech Centre of the South West College in Cookstown to carry out development work on the Klassoo Cattle Restraint. The device was produced by David Russell, a Fivemiletown-based engineer and Liam Keelagher, a Tyrone dairy farmer with input from a local vet.

Innovation Voucher support for the link-up between DBR Trading and InnoTech was announced by Olive Hill, Invest NI Director of Technology and Process Development, who said: “DBR Trading has come up with a novel idea based on the vast experience of those behind this small business.

“They’ve identified a problem facing many of those involved in our biggest industry and produced a solution that required some work to make the product easier to use.

“The Innovation Voucher enabled them to refine their solution with design input from the InnoTech team in Cookstown and to develop a product that they can now bring to the global marketplace. The DBR success demonstrates how an Innovation Voucher can help a small company turn a smart idea into a working prototype for eventual volume manufacture.

“It’s also a further example of innovation from our agriculture sector which will not only help local farmers reduce costs but also has extensive export potential,” added Mrs Hill.

Mr Russell, outlining how Klassoo works, said: “Administering drugs, applying ear tags and even just examining cattle can often be difficult and sometimes risky for both vets and farmers. The process can also be stressful for the animal.

“What Klassoo does is to provide an effective and simple way of holding an animal’s head steady during the whole process and especially when administering oral and nasal drugs.

“Our tests have shown that it is also extremely cost-effective because the restraint eliminates wastage of often expensive drugs.

“In addition, it’s very efficient in terms of time required to administer drugs or ear tags to a number of animals, enabling up to 70 to be vaccinated, for instance, in just over a hour, a feature which also has a positive impact on costs. We launched Klassoo at the 2011 Balmoral Winter Fair and received very positive feedback and have secured orders through a number of distributors throughout Ireland.

“What the Innovation Voucher enabled us to do was to obtain expert design support from InnoTech that helped us to solve some problems with the operation of our prototype and to produce an easier to operate device for both vets and farmers. This will enable us to move into full scale production soon.

“Our objective now is to drive sales through a network of distributors which we are setting up especially in markets outside Northern Ireland.”

DBR Trading was formed last year to help in the development and commercialisation of the Klassoo Cattle Restraint. Klassoo gained a JFC Award for innovation at a major farm equipment event in the Republic of Ireland in 2011.

Klassoo will also be showcased at the Holland Dairy Show at the end of June.