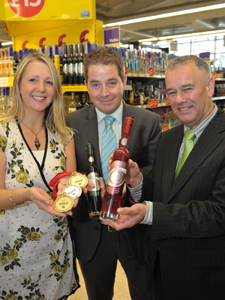 Boozeberries in Dromore is being assisted by Invest Northern Ireland to expand sales of a range of innovative berry liqueurs for export to the US, Europe, and Australia.

Formed by husband and wife team Stuart and Barbara Hughes in May 2010, Boozeberries has already won a string of international awards for its first handcrafted products using cranberries, blackcurrants and blueberries in a grain spirit. Having achieved initial sales in the United Kingdom and the Republic of Ireland, Boozeberries is now investing over £450,000 to step up production and drive business in target markets outside Northern Ireland.

Invest NI is offering financial assistance of £45,000 to help Boozeberries to achieve its targets, including the employment of six people by the end of 2013.

Assistance for Boozeberries, particularly in key areas such as marketing and design, was announced by Maynard Mawhinney, Invest NI’s Food Director, during a visit to the company.

Mr Maywhinney said: “This is an entrepreneurial and progressive business which is focused on the development of highly innovative liqueurs primarily for markets outside Northern Ireland, including North America, Europe and Australia.

“The company has identified significant opportunities for the premium products that it is developing in niche but lucrative markets. Our assistance will enable the company to develop its range of artisan products, and to build on the market awareness it has been creating through its encouraging success in international food and drink events.

“The project is an excellent fit for our strategic focus on encouraging entrepreneurial businesses that are committed to the development of unique and high added value products for the international marketplace,” added Mr Mawhinney.

Awards won by the company include gold and silver at the recent Wines and Spirits Wholesalers of America, (WSWA), tasting competition in Orlando, Florida and in the UK Great Taste Awards.

Outlining the company’s growth plans, Mr Hughes said: “Our aim is to produce a range of artisan fruit liqueurs naturally enhanced with the infusion of whole wild fragrant berries which can be enjoyed on their own or used to create cocktails and desserts.

“The awards, especially from influential bodies such as the WSWA in the US, have been immensely encouraging and show that the business has tremendous potential, particularly in one of the world’s longest established and most competitive markets.

“We are exploiting this potential by implementing an aggressive marketing campaign and we expect sales outside Northern Ireland to contribute around 75 per cent of business by 2013.

“Feedback from the listings we’ve already achieved with Tesco and Sainsburys in Northern Ireland, and Superquinn, Donnybrook Fair and Dublin International Airport in the Republic has been extremely positive.

“Invest NI’s encouragement and assistance will be invaluable and will support our marketing strategy to establish the brand and position the products at the premium end of the market, to strengthen the management team and step up production.”