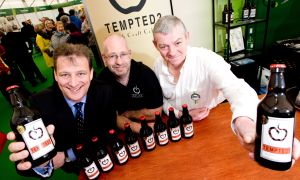 The deal to supply Wetherspoon’s was announced by Jeremy Fitch, Invest NI Executive Director of Business and Sector Development, at the launch of this year’s awards. Invest NI is sponsoring the Best New Product Award for the second successive year.

The Lisburn company, which is supplying Wetherspoons with a special cider for the UK chain’s Cider festival in July, was named Supreme Champion in the Cider category in the 2012 awards.

Urging local food and drink companies to enter this year’s awards, Mr Fitch said: “Winning an Irish Food Award is a great way to showcase a product to key buyers in major retail chains, independent stores, delis and foodservice organisations in the Republic of Ireland in particular, our most important export market.

“All the Northern Ireland companies successful in last year’s awards have enjoyed tremendous success particularly in markets outside Northern Ireland. Hannan Meats of Moira has seen its sales grow rapidly in Britain and is now supplying restaurants in Paris. It will soon start supplying to high-end restaurants in Italy. Blackthorn Foods of Belfast is now selling in the Netherlands and other parts of Europe. Fivemiletown Cheese has also been listed by OCADO, the UK’s biggest online retailer.

“The achievements of these and other local companies show that an Irish Quality Award is a stepping stone to success abroad,” added Mr Fitch.

Artie Clifford, Blas na Eireann organiser, said: “This is the biggest competition for quality Irish produce ever seen on the island of Ireland, and the finals take place in Dingle in October every year.

“The judges look for products that are made using top quality Irish ingredients, which have that extra something to make them outstanding. Northern Ireland companies did exceptionally well last year and all have gone on to grow business in markets such as Great Britain and the Republic of Ireland.

“According to research undertaken earlier this year, the majority of Irish shoppers recognise the Blas logo on products and are more inclined to buy them. Blas recipients have also reported a sharp increase in sales from the time that the winners are announced.”

DJ’s Juices has created a Sweet Summer Cider for Wetherspoon’s Cider Festival in July. Cider lovers will be able to taste the new Tempted? product in the chain’s 900 pubs during the two-week festival.

Entry forms and further information are available on www.irishfoodawards.com.