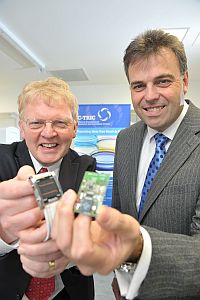 Invest NI is assisting a new company, Annagh Ltd, based at C-TRIC, Altnagelvin, to develop remote sensor technology that could help save the lives of Type 1 diabetics.

Annagh has become the 600th recipient of an Invest NI Innovation Voucher for a leading-edge research project. Invest NI has also offered £5,000 to help the company to develop the technology in association with staff at C-TRIC.

Mr Hamilton said: “Diabetes is a huge and rapidly developing international health crisis. Annagh is pioneering wristwatch technology that will warn of an impending blood sugar drop or hypo which could lead to a coma if not treated quickly. The remote sensor can trigger a series of alarms to highlight this extremely dangerous condition to family and friends of the person involved.

“Invest NI support for this highly advanced technology reflects our commitment to supporting innovation and in particular, facilitating and promoting developments in connected health and life sciences which have global business potential and can deliver significant benefits to patient care.”

Aubrey Sayers, Managing Director of Annagh, said the company is investing an initial amount of £12,500 towards the marketing of the technology already developed by the new business.

“Our potentially life-saving technology ties together data gathering and interpretation, and Bluetooth technology that transmits an alarm to a Smartphone. This alerts family or friends nearby when the person suffering from diabetes faces a blood sugar emergency.

“More than 347 million people have diabetes globally, and nearly 25 million in the US. Our solution to a global crisis marries innovation with existing technology and non-invasively monitors the symptoms of low blood sugars including skin moisture, skin temperature and increased heart rate. Recognising a potential critical situation, the technology activates an alarm which is passed via Bluetooth to a Smartphone which runs an application that triggers a series of SMS messages or phone calls to key contacts.

“The potential of the technology is immense because some seven per cent of deaths among Type 1 diabetics under 40 result from hypos. Currently Type 1 diabetics and their friends and family have to live under the cloud of blood sugar levels going low, especially at night. Rates of diabetes have nearly tripled in the US and more than doubled worldwide since 1980, according to a recent report in the British journal The Lancet,” he added.