JamPot lifts the lid on App innovation for mobile communications 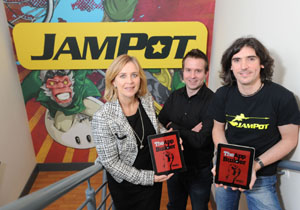 JamPot Technologies in Belfast has been assisted by Invest Northern Ireland to develop radically new app technology for mobile phones.

The innovation-led company, based in east Belfast, is set to turn the mobile phone app industry on its head by enabling companies, organisations and individuals to design, build and launch their own cross platform apps for minimal cost.

TheAppBuilder, launched recently at major telecoms events in the US and Europe, was developed with £160,000 of Invest NI support, part funded by the European Regional Development Fund. JamPot Technologies is investing almost £360,000 in the development and global marketing of the new product. Support for the business has also been provided by the e-Synergy organisation which assists leading-edge technology projects.

Invest NI’s support for the company, which is based on the Holywood Road in Belfast, was announced by Carol Keery, Invest NI’s Director of Innovation, Research and Technology.

Mrs Keery, commenting on the investment, said: “This is a highly innovative product that’s geared to smartphones, one of the most dynamic sectors of the telecommunications industry. However, the technology has applications beyond smartphones, to tablet computers, desktops and even televisions.

“Our support has been provided to enable the company’s experienced software developers to turn a concept into a product and then to bring it to market as quickly as possible. In addition, we’ve provided assistance to enable this small company to showcase the technology at major international exhibitions including AppNation, Intel Elements and AdobeMax, all in the US, and the Mobile World Congress in Barcelona.

“Mobile telecommunications is a key element within our strategic focus on strengthening Northern Ireland’s position as a developer of innovative technologies for the digital communications industry.”

Mr James Scott, JamPot’s Chief Executive Officer, said: “We set out to revolutionise the old approach where businesses could spend up to £10,000 or more on creating a mobile phone app for a single platform – far beyond the reach of many SMEs.

“TheAppBuilder has been designed for non-techies to create and update their own mobile apps in minutes. TheAppBuilder can be downloaded for free to a laptop, iPhone, iPad or Android device. When the user is ready to publish the app they can choose from one of our low cost monthly subscriptions, starting at $29, to have the app published to the leading app stores. We feel we’re ahead of the curve in levelling the playing field and enabling the widest possible access to app technology.

“The app market is set for major growth over the next few years. By 2015 mobile app revenue is expected to hit $38bn with businesses spending around $17bn on app services. JamPot are targeting a significant share of this market over the next 12 months. Invest NI’s encouragement and assistance have been extremely important to us because developing leading-edge technology and taking it to market is an expensive business. It has enhanced the funding from our own investors and enabled us to concentrate on creating the technology.”

Last month in Los Angeles, Webprofessionals.org and MobileInnovators.org named JamPot as one of their 2011 Mobile Innovators alongside global companies like Sony, Blackberry and Adobe for TheAppBuilder.

Mr Scott added: “Encouragingly the product has been very well received by major software companies at all the international exhibitions that we’ve attended. We are now actively following up a number of very exciting inquiries from potential clients, particularly in the US. Our aim is to turn as many of these inquiries as possible into sales within the next few months.”