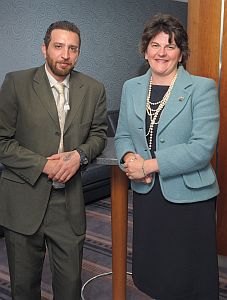 The Minister, speaking as she prepared to lead an Invest Northern Ireland trade mission to Kurdistan, said companies will now be able to access greater support in markets across the Middle East from a restructuring of existing resources and the introduction of additional services.

Minister Foster said: “Achieving sales of manufactured goods and expert services outside Northern Ireland is vital to accelerating our economic recovery. This is why encouraging and assisting many more local companies to engage in export activities is a key theme within Invest NI’s Boosting Business initiative.

“In addition, Invest NI has established a base in Jeddah, Saudi Arabia’s Red Sea port and second largest city, which will help our companies to grasp the exciting business opportunities from the kingdom’s ongoing investment in infrastructure projects. This significant expansion of support means that our companies can now count on Invest NI staff and advisors for guidance and assistance in key markets, including Kurdistan, that offer substantial business opportunities.”

Northern Ireland’s relationship with Kurdistan continues to grow and the Minister said that several companies are already doing significant business in Erbil and other centres in a nation which is investing huge amounts to improve the conditions and prospects of its five million people.

Arlene Foster said: “Business worth more than £2 million has been secured by our companies since the first Invest NI trade mission there in January 2011. Earlier this year, we also hosted a high profile delegation from the Kurdistan Regional Government in Northern Ireland, led by two senior Kurdistan Ministers, in July.

“This Trade Mission includes Northern Ireland’s first exhibiting presence at the Erbil International Trade Fair which attracts buyers from all parts of the globe. I am confident that further business will result from the contacts made during this current trade mission. It is also immensely encouraging that most of the mission members are visiting Kurdistan for the first time with Invest NI and six of the 20 participating companies are taking part in an overseas mission for the very first time.”

In Kurdistan, the Minister will be meeting KRG Ministers and key business leaders to discuss future opportunities for co-operation in areas such as trade, technology transfer, investment and tourism.