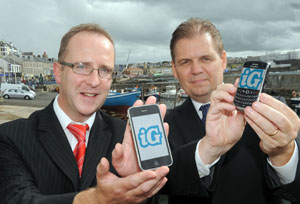 instaGiv, the Portstewart-based technology company, has signed a major partnership agreement with Nasdaq-listed Blackbaud, a US leader in software and services designed specifically for not-for-profit organisations.

Mr Gartland said: “This agreement is an important stage in the development of this enterprising company and will position it for accelerated growth in key export markets. Invest NI has been supporting the company to develop and market its innovative technology for fundraising organisations worldwide.

“The agreement clearly demonstrates that instaGiv has established a strong reputation for innovation and service within this developing global industry.”

Mr Carlin said: “We are delighted to have secured this agreement which is not only good news for ourselves but also for Northern Ireland. It is a further indication of Northern Ireland’s reputation across the world as a centre of ICT and software expertise.

“Blackbaud’s interest in our products proves that we have been on the right lines with our development strategy to deliver a product range which is both leading edge and functional.”

Commenting, Brad Holden, Blackbaud’s President of International Business, said: “Mobile technology is exploding globally. We have entered into this partnership with instaGiv because we believe that the innovative platform and products which the company has developed are ideally placed to leverage this growth and assist charities to fully embrace mobile into their fundraising and engagement strategies.”