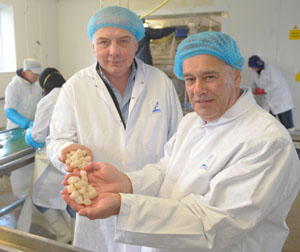 Kilhorne Bay Seafoods in Annalong has won business in France with its new Queen Scallops.

Assisted by Invest Northern Ireland to develop and market the new product, the company has also invested over £450,000 in state-of-the-art production equipment, which has been supported by the European Fisheries Fund.

The investment in exports is creating 13 new jobs at the Annalong processing plant, which currently employs 33 people. The company currently sells the vast majority of its output of scallops, peeled and breaded prawns and scampi outside Northern Ireland. Key export markets developed by the company include Denmark, Italy, and France.

Maynard Mawhinney, Invest NI Food and Tourism Director, visited the company, where he was briefed about the project and sales by John Chambers Snr, Managing Director.

Mr Mawhinney said: “This is an important move by the company, which has a strong reputation in seafood processing over four decades. The addition of the Queen Scallops (Queenies) to its existing and successful prawn and scampi products has opened up new export markets offering greater business opportunities.

“Our assistance has contributed to the development and marketing of the new Queenies as part of our commitment to encourage and support fish processing companies, which continue to make a significant contribution to coastal regions, and to the growth of our food industry.”

Mr Chambers, commenting on the investment, said: “We’ve had to respond to the impact of EU catch quotas. The decision to diversify into Queenies followed extensive research that has helped us to identify seafood that is not restricted by quotas and which offers a significant market opportunity, especially in Europe.

“Queenies are abundant around our coastline and are also attractive because they are sweeter than King Scallops. The new product also benefits local fishermen who can extend their days at sea by fishing for scallops in other areas. Using our expertise we are then able to process them for customers in the catering, wholesale and retail sectors and meet increasing demand by leading chefs across Europe.

“We’ve have been particularly successful in growing sales in France,” he added.

Demand for the Queenies has been strong and the company now supplies distributors in Boulogne and Le Havre, which provide the products to small processors in Brittany for use in ready meals.

Formed in 1969, Kilhorne Bay Seafoods sources its raw materials from trawlers based in Kilkeel, Ardglass and Portavogie. Quality processed products are now supplied to customers in catering, wholesale and retailing in Britain and other parts of Europe.