Shortbread treats from Ditty&#8217;s for Christmas meals in Dubai 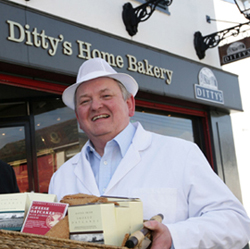 Ditty’s, the Northern Ireland artisan bakery run by Robert Ditty, who was awarded UK Baker of the Year 2011 in the annual Baking Industry Awards, has won its first export deal in the Middle East. It means ex-pats in Dubai will be able to enjoy award winning shortbread with their festive meals.

The bakery, based in Castledawson, landed the contract for its butter shortbread from Dubai’s Pan Euro Foods MENA for its network of foodservice customers. In addition, the Northern Ireland artisan bakery has received approaches from food businesses in Hong Kong and mainland China.

The Dubai deal followed an approach from Pan Euro Foods which was seeking a shortbread supplier especially for the substantial UK and Irish ex-pat community in the Emirates.

Dr Kell said: “Ditty’s success in the Emirates is another excellent example of quality products from Northern Ireland which can win business in even the most competitive markets. The company has grasped an important opportunity in the Emirates and is now positioned for further growth in this quality conscious and immensely significant marketplace.

“Ditty’s has also used its proactive approach to develop opportunities in Hong Kong and China.”

Mr Palframan said the company is delighted to have won business in such an important marketplace.

“Pan Euro Foods MENA is now well established as importers and distributors of the finest Irish and European foodstuffs into the Middle East and North Africa region and has the network of contacts to drive sales of our products there.

“We are excited about the business and look forward to working closely with the company to help increase sales of our award winning shortbread and to adding further products to the distributor’s portfolio in due course.”

Pan Euro Foods has a developing portfolio of Irish beef, seafood, cheeses, roasted vegetables and artisan chocolates. The company is headquartered near Dublin in the Republic of Ireland.

Ditty’s Bakery is renowned for its breads, including traditional Irish lines such as wheaten, brown soda, as well as soda farls and potato cakes.

The Ditty family have owned the bakery since 1963 and grown it to be a successful retail and wholesale enterprise, with a growing international client list.

The company, which employs 70 people at its home bakeries in Castledawson and nearby Magherafelt, uses local ingredients from other artisan producers including local farms and organic suppliers to offer a broad range of specialty biscuits, pastries, breads and savoury foods. It has an international reputation for its range of oatcakes.