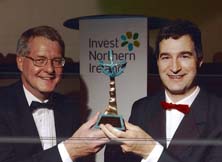 Andor Technology Ltd, a locally owned company based in West Belfast which manufactures scientific cameras, has been chosen as Northern Ireland’s top exporter in an event organised by Invest NI.

Andor Technology was successful because it had achieved annual growth in exports of over 50 per cent to high profile industrial and academic clients in markets from North America to Japan.

More than 250 business people from local companies, business bodies and councils attended the event, which is co-sponsored by the Northern Ireland Chamber of Commerce and Industry and British European.

Other awards announced last night were:

Praising the export achievements of Andor Technology, Prof Monds said: “This knowledge-led company, a university spin-out, is an excellent example of the entrepreneurship and commitment to innovation which is at the core of Invest NI’s strategy to accelerate Northern Ireland’s economic growth.

“From its early beginnings in the Physics Department at Queen’s University, Andor Technology has combined entrepreneurial flair with a dedication to innovation in its products and services to customers.

“To maximise the enormous potential of its scientific cameras quickly and to achieve fast growth Andor has successfully secured venture capital funding and is now positioned for even greater success. A key aspect of Invest NI’s strategy is to encourage many more companies to explore venture capital and other private-sector funding options for greater flexibility and faster growth.

“Entrepreneurship, innovation and enterprise are themes which underpin Invest Northern Ireland’s overall approach. Invest NI is committed to providing support services and programmes that will encourage and promote entrepreneurship throughout the community and increase capability and innovation among existing businesses.

“Innovation adds value by turning ideas and knowledge into new products, new services, and new ways of doing things. Competition is increasingly global and more demanding in ideas, skills and knowledge, and if Northern Ireland is to prosper, our companies must be encouraged and assisted to focus on innovation to ensure competitiveness and sustainable growth,” he added.

Said Mr Morrison: “We recognise that exporting is a vital part of our economy and society; it fuels economic growth; it creates wealth and higher incomes arising from the creation of higher quality jobs; it stimulates fresh thinking; it introduces new ideas, technologies and different ways of doing things into Northern Ireland; and takes our skills, experience and knowledge around the world.

“Our objective is to provide services that will enable our client companies to add significant value to their business and to achieve faster and profitable growth. We will seek to do this by means of matrix management through our client-serving teams and programmes, such as those provided through Invest in Trade, that are shaped to meet the specific needs of local companies.

”By working in partnership with local companies we will seek to achieve the ambitious targets set in our Corporate plan for the next three years which include a 10 per cent growth per year in export of manufactured goods and an eight per cent growth per annum in external sales by fast growing small businesses,” added Mr Morrison.


Bruce Robinson, Permanent Secretary at the Department of Enterprise, Trade and Investment, who presented the Tradeable Services Exporter of the Year Award, said: “Invest NI’s fresh approach, dedication and commitment to its clients is providing the business community with a progressive, knowledgeable and supportive agency that will facilitate faster growth. In the current economic circumstances, we all need to adopt new approaches, to be innovative and not to be hide bound by old cultures and ideas.”

He said the department’s Corporate Plan for 2002-2005, would be launched later this month.

Jim French, British European Managing Director, who presented the E-Business Exporter of the Year Award, said internationalising a business by exporting is one of the greatest achievements anyone can aim for.

"We are in an international arena serving many cities and understand better than most just how difficult it is to run a successful business when competing internationally.

"To export your services, expertise and goods is by itself a definition of excellence on an international scale and it is for this reason that we are delighted to be associated with the Northern Ireland Exporter of the Year Awards."


In addition to the awards announced above, the following companies received ‘Highly Commended’ certificates:

The awards were based on performance in exports over the three years to end of March 2001.