The Wright Group invests &#163;7m in innovation to enhance competitiveness 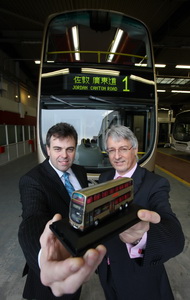 The Wright Group is investing £7million in R&D projects to develop new environmentally friendly technologies and cost effective bus designs, and in a programme of staff training. With the global downturn impacting significantly on the company last year, the investments, supported by an offer of £1.8m from Invest NI, are part of The Wright Group’s drive to increase competitiveness and ensure it is the best possible position to take advantage of opportunities in new markets.

The Wright Group is a leading independent supplier of accessible buses for public transportation systems in global markets. With £1.8millon of support from Invest NI - part funded by the European Regional Development Fund - The Wright Group will engage in a number of R&D projects to develop new environmentally friendly technologies and cost effective bus designs to take advantage of changing demands in the marketplace. This will be complemented by a programme of staff training.

The announcement was made as the company unveiled its latest bus design, a unique double decker bus which is targeted at the increasingly competitive Asian market.

Alastair Hamilton said: “The Wright Group is one of Northern Ireland’s most innovative and established manufacturing companies. Last year as the economic downturn peaked, it, like hundreds of local firms faced major difficulties due to the rapid decline in demand from international markets.

“The Wright Group was initially expecting to implement a significant number of redundancies, but a combination of measures including internal cost saving and restructuring initiatives, and help from Invest NI, resulted in the actual number being reduced by 60 percent.

“With Invest NI support, The Wright Group is now preparing for the recovery of global markets by investing in the development of highly advanced bus designs based on the results of extensive research into market trends. Central to the overall success of this will be a staff training programme aimed at strengthening the existing skills base and ensuring that new technologies and advances can be fully utilised as R&D plans are progressed.”

Mark Nodder, Managing Director of The Wright Group added: “The downturn has had a significant impact on our business with orders from a number of key markets either put on hold or cancelled, particularly in the first six months of 2009. Business has been slow to recover and while we had no choice but to implement a number of cost cutting measures, we recognised the importance of keeping your team together and preparing for the upturn.

“The investments will be directed towards developing innovative products and becoming world-class in manufacturing and will form the core of our plans to maintain the company’s position as a global leader in the provision of cutting edge public transport technologies.

“Invest NI support as always, continues to be instrumental and now we can ensure that capabilities in key areas are strengthened, allowing The Wright Group to secure new sales opportunities as markets improve. We have identified a number of highly advanced research areas for specific markets both in the UK and overseas and are confident the resulting new vehicle developments can be successfully commercialised. In addition, the training programme will ensure that our employees remain some of the most talented and highly skilled people in the industry, and The Wright Group maintains its reputation for innovation and excellence.”