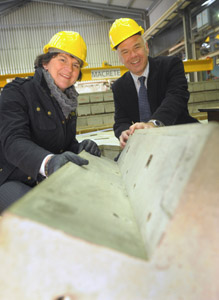 The Minister made the announcement during a visit to Macrete Ireland in Toomebridge, which has just announced a £637,000 investment in R&D to develop a new version of its award-winning FlexiArch system. The project is being supported by Invest NI, which has offered over £191,000 part funded by the European Regional Development Fund.

Arlene Foster said: “The support being offered under Invest Northern Ireland’s ‘Boosting Business through R&D’ campaign will help to stimulate more research and development in companies of all sizes.

“Recent figures show that Northern Ireland expenditure on R&D in 2010 was the highest ever, with spending by businesses increasing by 6% on the previous year. This shows that businesses recognise very clearly the value of investing in new products and processes to keep ahead of the competition and strengthen their long-term position.”

The support is part of Invest NI’s Boosting Business campaign and aims to encourage more market-led R&D, in particular among small businesses. It will offer small companies up to 75% grant support for R&D projects up to a maximum of £50,000. Applications for the support will be through a streamlined process making it easier for companies to quickly access the support, and will be sought on a call basis.

Financial support will also be available to encourage businesses of any size to undertake prototype development and market entry projects.

The Minister added: “Macrete Ireland is a good example of a company that has built its success on innovation and is continually looking for new products to add to its range and maintain viability. The enhanced R&D support for businesses announced today will help more companies like Macrete to get the funding they need to develop prototypes and bring new products to market.”

Macrete Ireland specialises in the design and supply of reinforced and pre-stressed pre-cast concrete products to the civil, rail, water, stadia, marine and agricultural markets. In collaboration with Queen’s University Belfast, Macrete developed their highly successful FlexiArch bridges. The current project involves developing a double radius version of the FlexiArch for railway arches and road or canal bridges.

Iain Hogg, Macrete Ireland’s Managing Director, said: “There are significant technical challenges in this project and significant cost in developing the prototype. Invest NI’s support is essential in allowing us to proceed and reduce the risk involved. We will be working again with Queen’s University to develop the double radius FlexiArch and have already received expressions of interest from potential customers.”