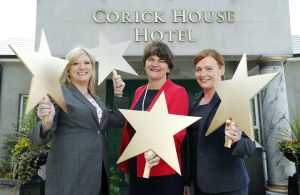 The award for the Clogher hotel follows a major investment of £1.4million including £230,000 support from Invest Northern Ireland. A new extension has more than doubled the number of bedrooms and a new spa and leisure offering will also open later this year.

Speaking during a tour of the new facilities Arlene Foster said: “The investment at Corick House further enhances the accommodation and hospitality offering for visitors to County Tyrone and the Fermanagh Lakelands. The superb facilities and proximity to the many attractions of this wonderful area make for a perfect location and I commend the directors and management for their vision in taking Corick House to the next level of quality.”

The 17th century country house now has 43 bedrooms and luxurious suites, nine of which are decorated in period style and situated in the original Georgian building. The remaining rooms and suites are located in the new wing, finished to an exceptional standard with stunning views of the gardens, valleys and local countryside.

The hotel has also won several awards for its food offering and provides a secluded wedding venue and conference facilities for up to 400.

Caroline Adams, NITB Quality and Standards Manager said: “This is the first hotel in County Tyrone to achieve four-star status through NITB’s Quality Grading Scheme, which is designed to give visitors a clear idea of the standards of hospitality, service, cleanliness, comfort and food they can expect during their stay.

“Consumers very much value these star ratings and for providers it makes sound business sense for accommodation providers to become quality assured. I would encourage other hotels and guest houses, B&Bs and self-catering establishments in the area to follow Corick House’s example and lead.”

Avril Robson, Director at Corick House said: “It has taken a strong vision and a tremendous amount of work to get to this point, so we are delighted that our efforts have been recognised by the Tourism Minister and that we have been graded as the first four star hotel in Tyrone by the NITB.

“We believe this quality acknowledgement will give Corick House increased visibility, a sharper marketing edge and will appeal strongly to visitors to the area.”