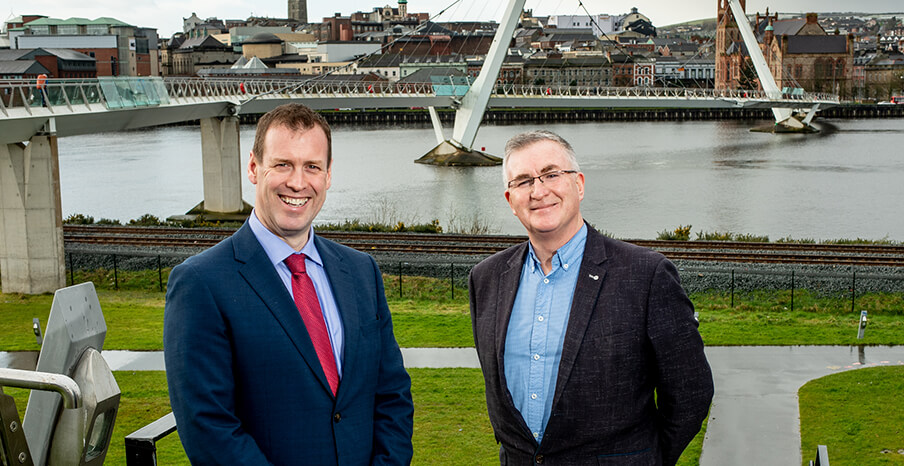 ROI based technology company, Deveire, is investing in Northern Ireland for the first time with a Software Development Centre in Londonderry. The centre will create 15 new jobs for the North West region over a three-year period.

Set up over 10 years ago, the company specialises in building web solutions for enterprises and large organisations looking to use the latest technologies for their digital presence.

When we began the process of expanding our team, we were eager to create a base where we had access to a strong talent pool of software developers; we believe Londonderry is the right place to find the talent we need.

Deveire has delivered platforms that power the systems behind over 50 globally-renowned companies including Johnson & Johnson, Cisco, Walmart, Coca-Cola, Amazon and the Special Olympics. It has also developed National Geographic’s and Hallmark’s video platforms.

Welcoming the company to Northern Ireland, Steve Harper, Executive Director of International Business, Invest Northern Ireland, said: “Deveire’s decision to locate its new centre in the North West is based on the many advantages this region has to offer international companies, particularly in the software and technology industry.

“With our support for 15 new jobs, the company will be able to build upon its innovative ambitions and expand in new markets. The new centre will also create economic benefit for the local economy, with £582,000 of additional annual salaries.”

Invest NI is offering the company £97,500 to support the creation of the new jobs.

Cathal Murtagh, Chief Operating Officer of Deveire, said: “When we began the process of expanding our team, we were eager to create a base where we had access to a strong talent pool of software developers; we believe Londonderry is the right place to find the talent we need.

“Also, as a part of our Brexit strategy, the Londonderry office gives us access to the UK markets. Invest NI’s support has been invaluable, helping us to build a team whose innovative expertise will allow us to develop new products and grow and explore success in global markets.

“Our Software Development Centre will focus on advanced computing and innovative technical approaches, to build next generation application solutions. It will have a strong focus on culture and people, through our working environment, but this will also be a key objective of our software solutions. Our aim is to create software that meets the users’ needs to allow for seamless experiences that are personal to a user, allowing people to reach their full potential.”

The company’s new centre will be based in Ebrington Square, Londonderry.