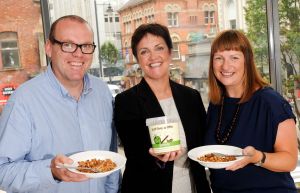 Portaferry-based Crawford’s Food has won its first business in Hong Kong for its Just Live a Little branded granolas with assistance from Invest Northern Ireland.

The family-run company has secured a contract that will see its breakfast granolas on the shelves of ParknShop supermarkets, Hong Kong’s biggest grocery business and leading online retailer.

The contract was announced by David Crawford, Managing Director of Crawford’s Food, a small business he formed in 2009 with wife Jill, and welcomed by Grainne McVeigh, Director Invest NI International Group.

Commenting on the contract, Ms McVeigh said: “This new and potentially very significant export business for Crawford’s Food is a further example of how our dedicated marketing staff in Britain are helping a growing number of smaller food businesses in Northern Ireland to grow sales abroad.

“This ambitious company has developed a unique range of quality granola and muesli and responded extremely quickly and successfully to the introduction to this important UK distributor. Our business development teams have been working closely with a number of our food companies, both large and small, to help them secure worthwhile contracts in global markets such as Asia.

“As the initial contract for Crawford’s Food in Hong Kong demonstrates, the opportunities are significant even for smaller companies if they have the right quality products and are prepared to follow up leads quickly and professionally.”

Mr Crawford said: “This is an immensely exciting contract which gives us a platform for growth in Hong Kong and other markets. There’s tremendous demand from ex-pats and Chinese residents in Hong Kong for quality UK produce. What seems to have helped us win the business is the different flavours provided by our combinations of natural ingredients.

“I appreciate greatly the support and advice provided by Invest NI in creating the bridge for me to pitch our products to this major international food distributor. Winning this export business in our first two years in business is extremely encouraging.

“Our focus now is on developing sales outside Northern Ireland, where we have an established distribution through delis, farm shops and upmarket grocers.”

This further success follows the company’s first orders outside Northern Ireland when earlier this year it was included by Fine Foods in its portfolio of products distributed throughout the Republic of Ireland.

The company’s products include ingredients from other Northern Irish suppliers such as White’s natural oats and bramley apple sauce from County Armagh.

Ingredients in the range of granolas are all mixed by hand and then slow baked to develop their delicious flavour and texture.

The Just Live a Little brand was launched by the company earlier in the year to develop a stronger identity for the products. New products in the pipeline include granola mini bites and different granola flavours.