Portglenone business paves a path of success in Great Britain 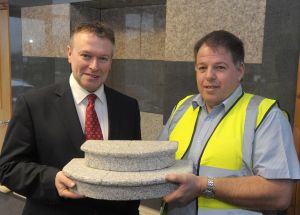 Portglenone-based Gibson Paving Limited has secured almost £800,000 worth of new business in Great Britain as a result of its export sales drive supported by Invest Northern Ireland.

The Co. Antrim firm, established over 25 years ago, provides brick and granite paving solutions to private and commercial sector customers. Gibson Paving has focused on developing new commercial opportunities in Great Britain and the Republic of Ireland in recent months and is now beginning to be rewarded for its efforts.

The firm invested over £360,000 last year as part of a strategy to position itself as a specialist paving contractor in Great Britain. As a result it has now secured a number of valuable projects with customers in the south of England, including Felixstowe Port in Suffolk.

Commenting on the company’s achievements, Freddie Gibson, Managing Director of Gibson Paving said: “Northern Ireland’s domestic housing market was becoming increasingly competitive as a result of the economic downturn. To overcome this, we recognised the need to look beyond local markets and invest in our marketing and management capabilities in order to secure high value commercial contracts in Great Britain and the Republic Ireland.

“We have many years of experience in the paving industry and can assist each customer with their specific requirements. Invest NI’s support with searching the market and approaching new customers over the past year has helped us secure these projects and we aim to build on this success over the coming months.”

Gren Armstrong, Invest NI’s Northern Eastern Regional Manager added: “Gibson Paving has invested considerable time and effort into accelerating the growth of the business, particularly outside Northern Ireland. The company’s commitment and ambition is now paying off as it establishes a promising, competitive position as a specialist paving contractor in Great Britain and the Republic of Ireland.”