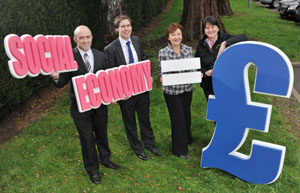 Enterprise Minister Arlene Foster today launched a series of masterclasses aimed at uncovering the value and potential of social enterprise for the private, public and third sectors.

Speaking at the series press launch, Arlene Foster said: “I am well aware of the vital role played by social enterprises and its contribution to the local economy, particularly in these challenging times.

“The social economy sector is well-positioned to help the Executive meet many of its social and economic goals and has a unique contribution to make to the Northern Ireland economy in regenerating disadvantaged communities and areas. This series will build on the success of the first series and help demonstrate that the social economy means business.”

The series is being taken forward by a Private/Social Enterprise consortium made up of the School for Social Enterprises in Ireland, Ulster Community Investment Trust (UCIT) and Podiem Ltd.

Representing the consortium, Jonathan McAlpin, UCIT’s Director of Operations explained: “This masterclass series will provide a forum to stimulate debate and highlight specific examples of how social enterprises, the public sector and the private sector can work together and benefit from each other. Each masterclass will feature an inspiring story from a local, Northern Ireland based social enterprise as well as speakers from further afield who will share their own experiences, demonstrating the capacity of social enterprise to act as a major force for economic and social change.”

The Masterclass series is supported by the Department of Enterprise, Trade and Investment, Invest Northern Ireland, Department for Social Development, The Flax Trust and Ulster Bank. In addition to local and international speakers each event will also feature a Q&A and discussion with a panel of experts from the private, public and social enterprise sectors. Through these sessions attendees will have the opportunity to shape the future of the local social economy and network with key decision-makers.

There will be four masterclasses taking place between March and June with three in Belfast and one in Londonderry. Each event will have a specific focus and the key themes to be addressed include ‘Finance for the Sector’, ‘Private and Social Enterprise Collaboration’ and ‘Transition from Community/Voluntary to Social Enterprise’.

The first event in the series, which is entitled ‘Building Business Growth’ will take on the morning of Thursday 1 March at Invest NI, Bedford Street, Belfast. The masterclass will feature an address from international social entrepreneur Dr John Bird and the local exemplar case study will be presented by Marie Marin, CEO of Employers For Childcare.

Speaking at the launch Marie Marin explained: “There are tremendous opportunities for growth and success within the social economy. Employers For Childcare Charitable Group has moved from being entirely dependent on Government funding in 2004, to being entirely self financing in 2008, through the development of two Social Enterprises. Indeed in the last 12 months alone we have doubled our workforce to 40 employees.”