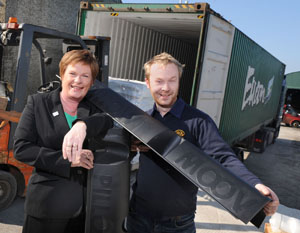 Wilson Agri, based near Coleraine, has won business worth more than £150,000 from Hungary for its innovative cow cubicles and mattresses following its participation in an Invest Northern Ireland trade mission last year.

The company, which already sells around 70 per cent of its products outside Northern Ireland, is supplying cubicles and mattresses to farms in Hungary through a dealer in Budapest. The agreement, the company’s first business in central Europe, was signed during the mission to Hungary and Slovenia last June.

The export success was announced by Andrew Wilson, Wilson Agri’s Managing Director, and welcomed by Dr Vicky Kell, Invest NI Trade Director, who said: “Hungary is a market that we’ve been encouraging and assisting companies to explore over the past two years. The focus on Central and Eastern European markets is an integral part of our strategy to help our companies, both large and small, to exploit opportunities in new markets that they may not otherwise consider.

“Hungary, which has a population of 10 million and a strong trading tradition, is now well-established as one of the most successful in the region for UK companies, purchasing products and services worth more than £4 billion in 2010, up 30 per cent on the year before.

“While it has also been adversely affected by the global downturn and credit issues, there are still significant opportunities developing from the Hungarian government’s continued efforts to modernise various aspects of the economy, including agriculture.

“Hungary, in addition, provides a solid platform for businesses to develop opportunities in neighbouring markets including Austria, Croatia, Slovakia and the Ukraine,” added Dr Kell.

Mr Wilson said: “The business that we’ve won in Hungary is the outcome of a conscious decision by the company to focus on business outside Northern Ireland for growth. While Great Britain is now an important market in which we have invested in setting up a sales operation, we believe there are tremendous opportunities further afield.

“This conviction has been strengthened by business for cow mattresses that we’ve also won in Indonesia. As a result of this commitment to exports, sales outside Northern Ireland now contribute 70 per cent of our business.

“Hungary looks likely to become another important market for us because of the size of dairy farms there and the work underway to develop the agri-food industry. Our cubicles and mattresses attracted the interest of dairy industry representatives there because of unique features designed to provide maximum comfort for dairy cows. Research shows that comfortable conditions lead to more productive cows in terms of both milk yield and quality.

“Invest NI has been immensely supportive of our export strategy. We’ve been assisted and advised by the Invest North West Regional Office in Londonderry and by the Trade team in Belfast who introduced us to the experienced UKTI commercial staff in Budapest.”

Wilson Agri, formed in 1995 to manufacture products including cow cubicles, currently employs seven people at its manufacturing operation near Coleraine. The company’s longstanding commitment to R&D has resulted in a series of innovative products including the unique ‘moovApillow’, a soft, adjustable, plastic arch that replaces concrete and offers cows greater comfort when lying in a cubicle.