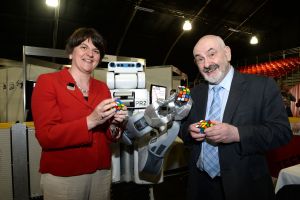 Enterprise Minister Arlene Foster today announced a £5.3 million investment by the University of Ulster to establish a facility for functional brain mapping.

Invest Northern Ireland has offered £2.6 million of support for the project, part funded by the European Regional Development Fund.

The Functional Brain Mapping Facility will be located at the Intelligent Systems Research Centre (ISRC) on the Magee campus of the University of Ulster. It will house specialist advanced imaging equipment to measure brain activity.

The aim of the Functional Brain Mapping Facility is to research a number of neurological disorders including depression and Alzheimer's disease.

Announcing the investment, Arlene Foster said: “This new facility will strengthen the R&D infrastructure in Northern Ireland and has the potential to move us closer to being able to diagnose and treat some forms of mental illness, which is a truly worthwhile objective.

“Our Programme for Government recognises the importance of innovation and R&D in rebuilding and rebalancing the local economy. However, innovation on its own is only part of the picture. Commercialisation of research is what drives business and economic success.

“This project is an excellent example of an academic research project that has sound commercial application. Over the next 10 years it is anticipated that it will generate significant revenue streams.”

The project will be carried out by ISRC in conjunction with the Biomedical Sciences Research Institute, C-TRIC and the Institute of Nursing and Health Research at the University of Ulster.

Professor Martin McGinnity, University of Ulster, said: “Today we are closer than ever to understanding the operation and complexities of the human brain, in health and illness. As a result of this initiative, researchers in Northern Ireland are able to make a greater contribution to this great challenge, alongside the EU - via its Human Brain Project - and the USA - via its Brain Research Through Advancing Innovative Neurotechnologies (BRAIN) project.

“If we can understand better how the brain works, the impact on society will be enormous, both in terms of our health and employment in health related industries. The Functional Brain Mapping facility announced today is the only such brain imaging system on the island of Ireland, and our vision is to exploit its capabilities to perform excellent research in neurological research and commercialisation.”